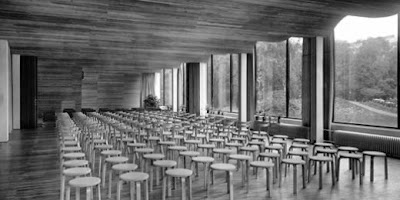 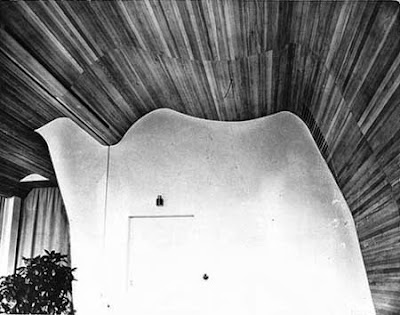 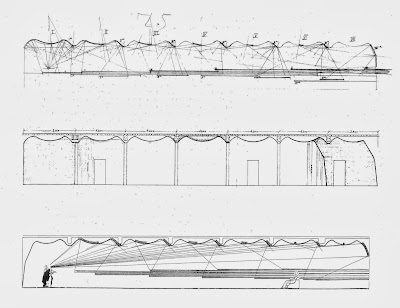 Perhaps the most celebrated acoustic form of the early Modern Movement is Aalto’s wavy lecture hall ceiling at his Viipuri library (Blundell Jones, 2002), also completed in 1935. Not only is this an important detail in one of his greatest masterpieces: it also proved a forerunner for his later design vocabulary, recurring in many forms. There is little doubt thatAalto was sincere about the acoustic intentions, as a series of sections have been preserved which explore the paths of reflections between speaker and audience, for various different positions of the speaker. Furthermore, leading historians of the period were prepared to take him at his word. No less a figure than Sigfried Giedion (1966) claimed:

‘Of course, the architect himself can prove, with meticulous acoustic diagrams, that the undulating form he gave the ceiling enables sound to reach the human ear more perfectly. Here, therefore, scientific reasoning and artistic imagination have merged to free architecture from that rigidity which is today an ever-present menace.’

However, the lecture hall was only so long and thin because Aalto decided to fit it into a linear office wing whose width was governed by the upper floor, so he brought the acoustic problem on himself. Furthermore, it is doubtful whether the original intention is achieved at all. A fundamental mistake of the design is that the wavy ceiling was intended to reduce the sound attenuation along the length, or in other words, to create a relatively even sound field, but according to recent research (Kang, 2002), the effect of such a ceiling form is likely to be just the opposite. The wavy ceiling provides more diffuse reflection, and it has been theoretically and experimentally proved that with diffusely reflecting surfaces the sound attenuation along the length is greater than that with smooth surfaces. This is because with diffusely reflecting surfaces, some sound energy is redistributed towards the source due to backscattering.
The wavy ceiling might not have been entirely useless in acoustic terms, however, for the curves covered up a series of downstanding structural beams that would have made acoustic compartments with unwanted resonances: also the lack of parallel between floor and ceiling would disperse reflections rather than allowing them to build up into standing waves with the hall only partly occupied. Thus if the ceiling is less than credible as a positive acoustic measure for the reflection paths it creates, it is at least effective as a negative measure, for preventing other acoustic problems that might otherwise have arisen.

As a form in the building, the ceiling was important in many ways, and Aalto made it surprisingly visible on the outside through the tops of the windows that lit the room. On the one hand it introduced a new way of making layered ceilings with contrasted levels – something found throughout the later work – while on the other it introduced a vocabulary of curves that Aalto went on to exploit imaginatively in almost endless ways. Related to the human body and its movements – for example, his ergonomic handrails – these curves related also to the new technology of laminating wood used in his furniture. In composing buildings they allowed special incidents and points of focus, nearly always in contrast with the rectangular norm. That these curves seemed by their designer naturally given – or at least obedient to natural laws – was important for their justification whether or not they actually worked acoustically.

Excerpt from: Acoustic form in the Modern Movement (2003) by Peter Blundell Jones and Jian Kang